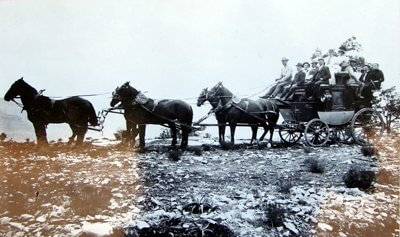 The passion and fervor to create tourism access to the Grand Canyon is equally matched by the awe and magnetism this grand chasm evokes in people who now come from all over the world. Considering the remoteness and lack of development in Northern Arizona in the late 1880’s and early 1900’s, the pace of tourism development on the South Rim was astounding.  These historic structures add to the richness of the visitor experience today and fire our imaginations.

In 1872 John D. Lee opened the first ferry service over the Colorado River.

Flagstaff and Phoenix were established in the 1860’s less than 20 years after obtaining the land from Mexico.  by 1872, John D. Lee opened the first ferry service over the Colorado River from the east.

The railroad did not come to Flagstaff until 1882.  Stagecoaches started bringing tourists to Grand Canyon from Flagstaff the next year. Despite the lack of access, enterprising Americans knew this was going to be a major attraction.

All of the early roads from Flagstaff, Williams and Ash Fork to the South Rim were built by canyon pioneers (by the 1920’s  these were taken over by Coconino County).

Harrison Pierce in 1876 opened a ferry service over the Colorado River on the western end.

The 1880’s was the heyday of the first South Rim tourism entrepreneurs:

1891 Peter Berry, a “miner”/would-be tourism operator built the Bright Angel Trail and the mule ride tradition began.  Enterprising Ralph Cameron bought these “claims” that year and began charging visitors $1 per head toll up until 1912, the year of Arizona becoming a state. 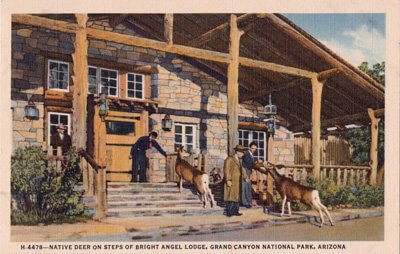 In 1896 the Bright Angel Lodge in what is now Grand Canyon Village opened by James Thurber who ran a stage line from the Grandview area to this new location at the head of Bright Angel Trail. 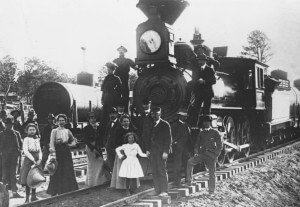 By 1901 the Santa Fe Railroad developed a spur to the Grand Canyon and was beginning their tourism infrastructure development in association with the Fred Harvey Company.

Politician Ralph Cameron fought the railroad for years to keep his exclusive access via his hundreds of unpatented mining claims so he could mine the tourism dollars.

The railroad hired artists to paint the canyon to stimulate public fervor to visit this natural wonder.  And the Fred Harvey Company early on used Native American people and their art as part of their tourism attraction.

Native people were part of the Grand Canyon attraction as seen in this historic post card. 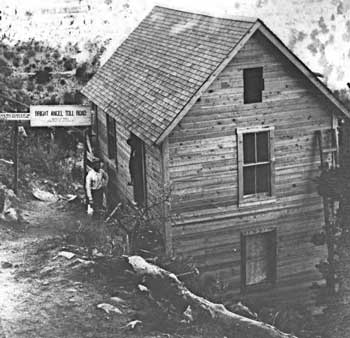 In 1902 the Kolb brothers began popularizing photographic images of adventures in the Canyon and building their tourism studio.

1902 was also the year the first auto made it to the canyon rim.

In 1905 the Fred Harvey Corporation opened up the elegant El Tovar and the rustic Hopi House side by side.  Hopi and Navajo people would dance outside daily.  The Corporation required that one of them wear a Plains Indian headdress since this was the stereotypical image of what an Indian looks like. 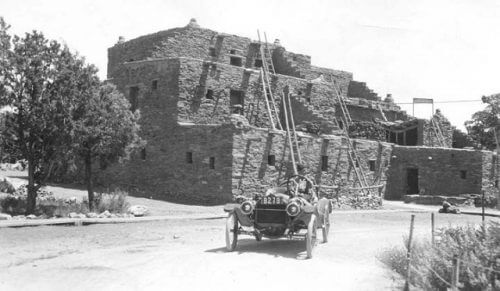 Both Navajo and Hopi people worked at the Hopi House. Hopis lived on the upper floors of the building and Navajos had hogans nearby.  Hopi House opened in 1905, a year before the break up of the Hopi village of Oraibi.  This multi-storied and largest of the Hopi villages, had been a source of inspiration for architect Mary Jane Colter. 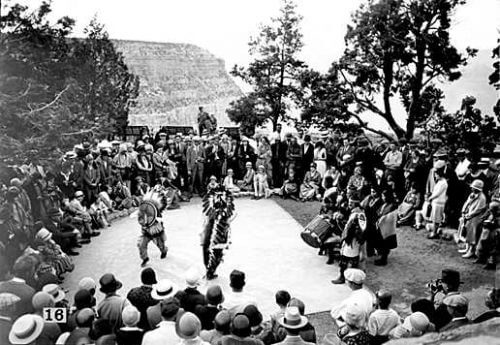 Hopi dancers doing the Victory Dance by Henry G Peabody, 1930 on platform next to Hopi House. 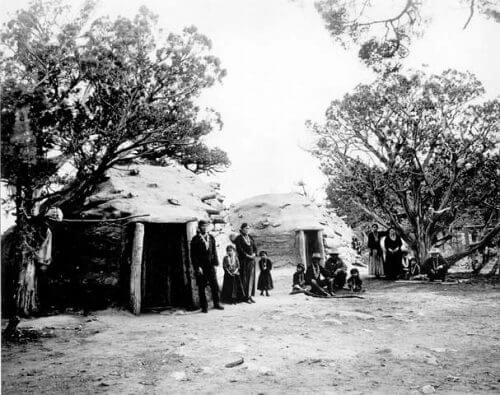 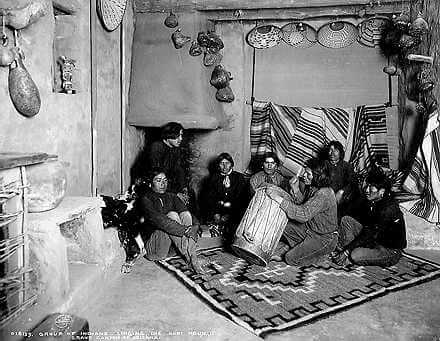 Navajo demonstrators inside the Hopi House 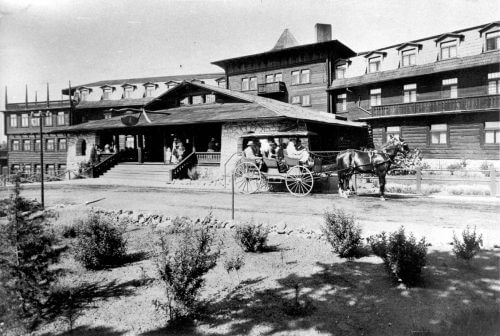 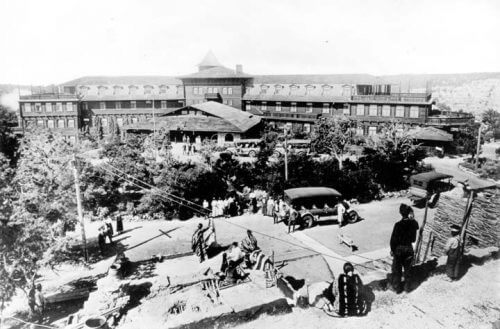 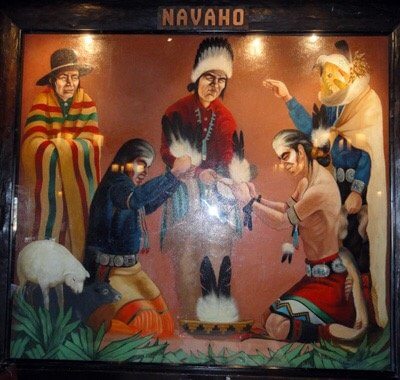 By 1908–the year Grand Canyon National Monument was designated— the first cable was placed over the Colorado River in the bottom of the canyon and the development of the Phantom Ranch tourism camp began. 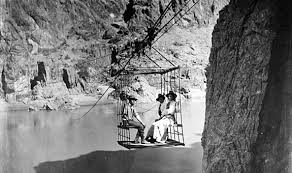 Cable Car over Colorado River at bottom of Grand Canyon

In 1912, the West Rim Drive was completed and then in 1914, Hermit’s Rest, another Mary Jane Colter design, was built at the end of Hermit’s Road as a tourist rest spot with food and restrooms.

In 1918 the Grand Canyon officially became a national park. In the late 1920s the first rim-to-rim access was established by the North Kaibab suspension bridge over the Colorado River and Phantom Ranch was expanded only two years later. 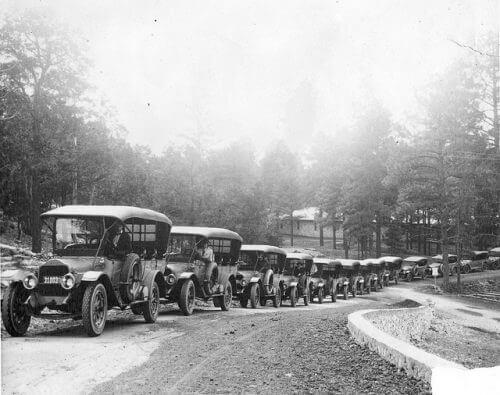 In 1920 Arizona had about 300,000 population, only 20 private auto registrations and northern Arizona was still very much a frontier with no paved roads. Still, in that year, visitation to the Grand Canyon reached 67,315.  By 1926 more people were coming by auto than train.

1922 Phantom Ranch tourist lodge opened on the canyon bottom on the north side of the Colorado River near its confluence with Bright Angel Creek and Phantom Creek. 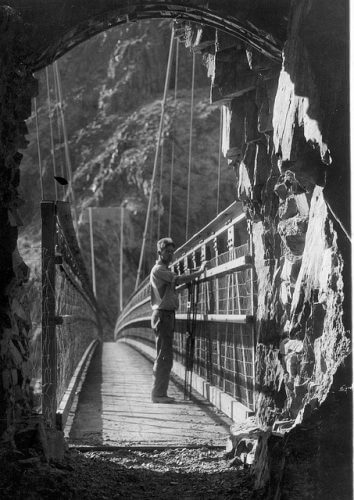 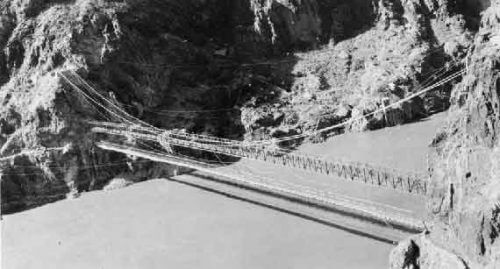 1928 Kaibab Suspension Bridge was completed linking the north and south rims by trail.

During the 1930’s the CCC did major trail, communication and structural development work in the Grand Canyon National Park that really made a difference in accessing the interior of the Canyon.  They left a lasting legacy still in use today.

1937 repair to phone line via mule back. 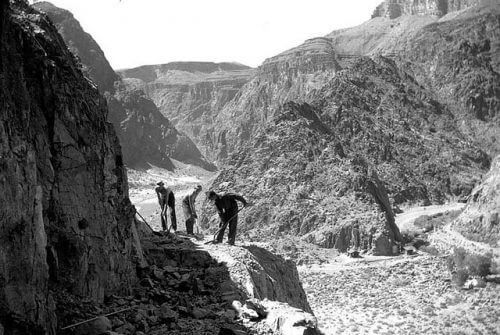 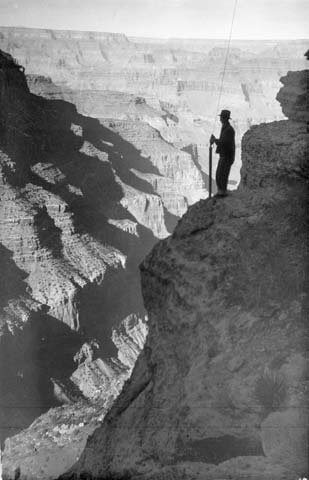 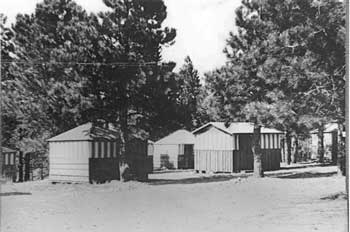 The North Rim was accessible only from Utah and only during the summer months due to its much higher elevation than the South Rim, thus tourism did not get a foot hold there prior to national park designation. The Wylie Way Camp operated from 1917-1927 when the Park Service cancelled its permit. 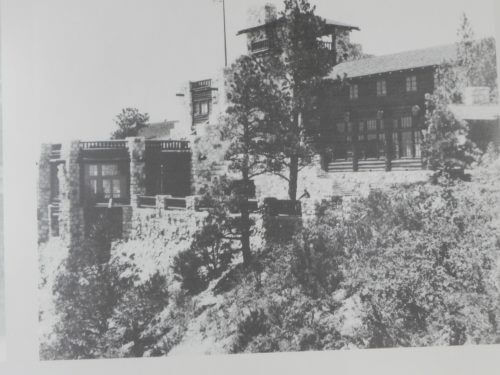 On the North Rim, the Grand Canyon Lodge opened in 1928 under exclusive concessionaire contract to Utah Parks Company, a subsidiary of the Union Pacific Railroad.

It was closed by a fire in 1932 and reopened in 1935.  The North Rim Lodge has remained true to its rustic style since reopening in 1935. 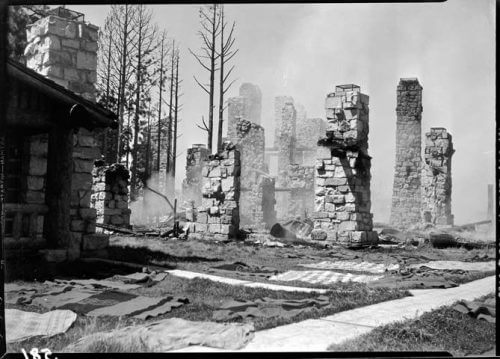 Ruins of Grand Canyon Lodge on North Rim after destroyed by fire 09/01/32.

The opening of the Navajo Bridge in 1929 created the first road connection of the North Rim to the rest of Arizona. This was a major event. 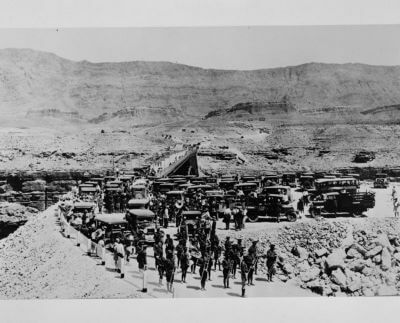 Navajo Bridge over the Colorado River grand opening in 1929. 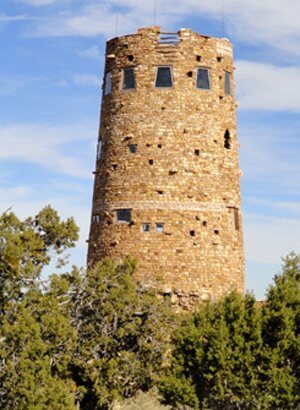 Desert View Watchtower, also known as the Indian Watchtower at Desert View–a 70-foot stone building by Mary Jane Colter was completed in 1932 at the eastern end of the Grand Canyon.  It was inspired by prehistoric towers Colter had viewed in other areas of the Southwest.

“First and most important, was to design a building that would become part of its surroundings; one that would create no discordant note against the time eroded walls of this promontory.”

Colter hired Hopi artist Fred Kabotie to paint Puebloan murals and even installed an alter of the Snake Clan.

The tower overlooks the great bend of the Colorado River on the east side of the Grand Canyon.  Hopi ancestors used to farm on the Colorado river delta below and the Hopi place of emergence into this, their fourth world, is at this end of the Canyon. 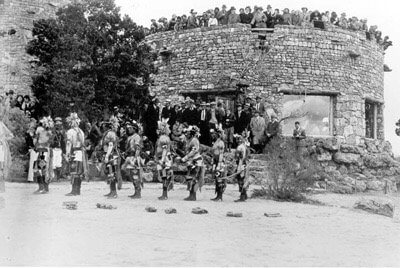 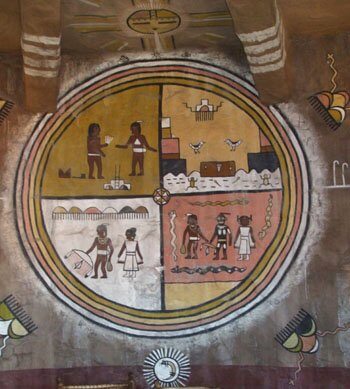 On 2nd floor of Desert Watchtower Hopi artist Fred Kabotie painted a series of murals depicting ancestral pilgrimage to source of the waters to obtain the rain making Snake Dance ceremony.  The Snake Altar is in the center of this room–which normally would be be displayed in public.  A Hopi priest I know told me that he believes the reason the tribe has allowed the altar to remain in public view on the second floor of the tower could have something to do with the sacred sites below. 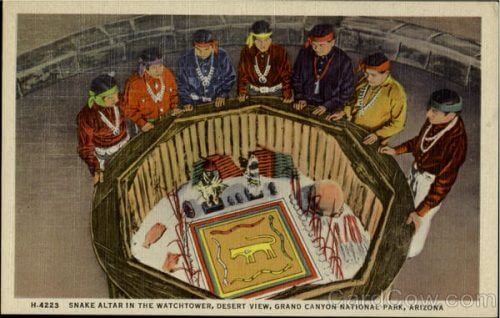 Brighty of the Grand Canyon

And still today, people come and stand in awe on the rim or hike into the depths. Unlike 100 years ago visitors can now rent mountain bikes, take a bus shuttle, and helicopter and river raft tours. But they spend less time just being in the wonder of it all than did the early day adventurers.

Public domain historic photos posted in article along with modern day ones by Sandra.