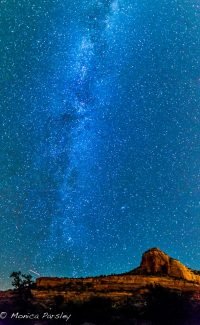 “By you they will know the directions to guide them.”
(Bernard Second, Mescalero Apache speaking of the stars’ role in human creation) 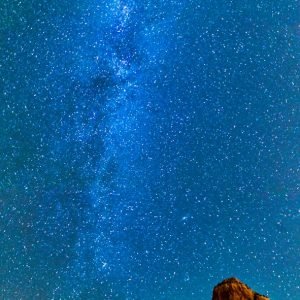 Here in the Colorado Plateau country, a magical region lifted to the sky, the stars are a constant, abiding presence.

Comforting, reassuring, tantalizing, stars are felt as an essential part of our inner landscape. The patterns in the stars are patterns in us is ancestral wisdom of this region.

People in Sedona so value the view of the night sky, that we have a Dark Sky Ordinance.

Flagstaff, just to our north was the the first U.S. city to have such an ordinance. Lowell Observatory, where the planet Pluto was discovered is located there, along with an array of other public and private observatories. Night sky nature, however, is lost to over 90% of the earth dwellers due to urban light pollution.

For humans grown accustomed to artificially lighted night and Hollywood images of the monsters lurking in the dark, being out in nature at night commonly evokes fear.  Here in Sedona, celestial phenomena are events.

Susan Zwinger, eloquently speaks of the “Nocturnal Cantata of the Colorado Plateau”*:
“Now I know why so many animals hunt in the night–as the visual landscape is sponged into human-sized dark, the auditory landscapes takes its most precise shape.”

Shooting stars of the August 12, 2004 Persiod Meteor Shower burst in curving streaks of white fire across the dome of the pre-dawn sky.

Gathered in circle for a medicine wheel ceremony I was leading, we focused on our intentions for new balance. We absorbed the star energies, aligning ourselves with the greater patterns of the universe. Each cell in our body an electrical “star” receiving sparks from the celestial display above.

Senses alert all night on her solo vision quest in Canyon de Chelly, one of my group coined the term: “resonant fly-bys” to describe the swooping visitations of winged ones. 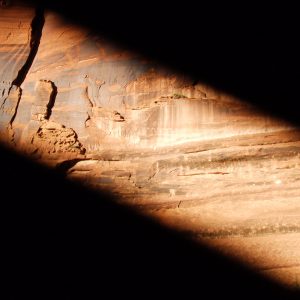 A summer night constant, the pulsating cricket chorus seem to echo the song of the stars.

This is the realm of the imagination, that terrain of the unseen. The Holy Wind, or inner form of all life that flows between and within the stars and the cells of our body seems closer in the receptive dark vessel of the night.

This is especially true in Canyon de Chelly which feels as if it was designed as a starport.  In Navajo legend, it was known as an earthly place of divine connection at the time when supernaturals still walked the earth.

“We have loved the stars too fondly to be fearful of the night,” says star trail photographer Dan Peha.

Native peoples have always been astute observers of the night sky.

Navajo Black God who is said to have placed the stars in the sky.

For the Navajo, the stars are living supernatural beings who embody the rules for living.

First Woman used the stars as a tablet upon which to write the rules that would govern the behavior of humans.

Every earthly creature has a celestial counterpart. Hozho is central to Navajo thought–this involves wellness, beauty, harmony, balance between the tension of opposites. Two carefully balanced star groups embody this concept: Male One Who Revolves (The Big Dipper) contains the central fire of life (the North Star) and Female One Who Revolves (Cassiopeia) is a basket who contains that fire within.

The stars have the ability to assist in healing. For example, in the Navajo Great Star Chant, the stars of the sandpainting on the hogan (round traditional dwelling of symbolic cosmic design) floor receive their healing power from a bright star that shines though the smoke hole in the roof of the hogan.

Another earthly reminder of the power of the stars is found on painted star ceilings in caves in Canyon de Chelly. No longer painted today, these panels are regarded as sacred and their ceremonial use is a closely guarded secret–a power not to be misused or diluted by becoming common knowledge when used out of context.

Star People play prominent roles in the cosmology of most tribal peoples as bringers of wisdom. Many Hopi kachina carvings, for example, are inspired by such celestial advisors.

The New Fire of the Hopi year is ceremonially lit with the winter Wuwuchim ceremony in November when the Pleiades, Orion’s Belt, Castor and Pollux and Procyon are visible in the opening at the top from the kiva (underground spiritual chamber symbolic of emerging from previous worlds) roof. The prayers are carried skyward on smoke. During one night of the ceremony all roads are closed to the village, leaving only a pathway for the return of the supernatural Katsina spiritual helpers.

“Tribal ceremonies send heart energy out into the cosmos…these energies are amplified in an expanding wave and have the power to create stars,” according to Physicist Dan Winter.

Einstein discovered that the 12 major elements that are in our body are also present when a star is born. Science has discovered what ancient peoples always knew, we are literally made of stardust.

May you discover your shining star and knowledge of your place in the universe with assistance from the pulsating presence of the stars.