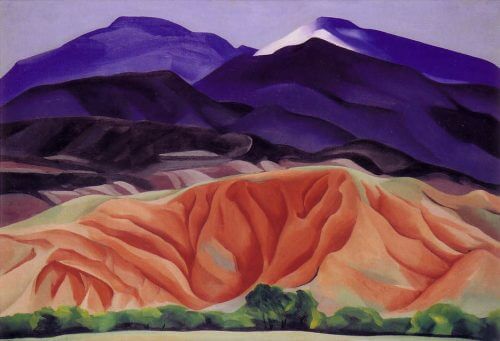 Here, the Rocky Mountains end in a rugged series of uplifts such as the Sangre de Cristo Mountains. The Great Plains laps up against the eastern edges and the vast Colorado Plateau pushes against the western side. It is a place of thin, dry air and clear light that is so prized by artists and photographers. In this transparent air, mountain and cliff are etched in stark contrast.

This is a tri-cultural meeting place, too, of distinct cultures at the edges of their range.

Due its lack of material wealth, New Mexico was largely bypassed in the westward expansion of the US, so instead of becoming a melting pot, it has remained a mosaic with it own unique character.

Some of the tri-cultural places I have enjoyed exploring over the decades.

My explorations and related studies have helped me gain understandings of Southwest peoples–their worldviews, history, arts, unique regional foods and relationship to the dramatic, sculpted landscapes and sun washed, high, clear air.  I wish you, too, the joy of discovery.

Taos.  Sitting high on the edge Taos Mountain, Taos reflects a colorful mix of its heritage: Ancestral Puebloan culture, Spanish settlers, frontier mountain men and an American artist colony dating back to the early part of this century. Taos history is filled with colorful individualists.

Taos Pueblo is the only living Native American community designated both a World Heritage Site by UNESCO and a National Historic Landmark. The multi-storied adobe buildings have been continuously inhabited for over 600 years.

Eclectic Santa Fe. Santa Fe was has long been a trading and cultural crossroads. A great place to start is with a Santa Fe historic district walking tour.  I love the tradition of Native peoples of the area displaying their art around the plaza.

The adjacent Canyon Road gallery district with its narrow, Old World street is a feast for the eyes–the architecture blends Spanish colonial, Spanish/Pueblo and American territorial in garden settings that surround the many artist galleries on this 3/4 mile road.

In Santa Fe, you can visit the international folk art museum, sample unique nouveau southwest cuisine, and visit the Santa Fe School of Cooking. Santa Fe.  Northern New Mexico is also become home to forward thinking physicists and scientists such as those found at the Santa Fe Institute and to an eclectic variety of spiritual practices.

Chimayo (settled in 1696) is known for it weavers, chilis and mission church where people pilgrimage to connect with its healing earth. I love the local grown chilis and the great Mexican food found here.

The Sanctuario Chapel at Chimayo, completed in 1816, is the destination of the largest religious pilgrimage in the United States, which occurs during Holy Week. The roads to Chimayo have been traveled by pilgrims since ancient times.

Indigenous ruins near the Sanctuario predate the Spanish by at least six hundred years and Tewa Indian cosmology reveres it as a place to benefit from the healing earth. The Tiwa-speaking Pueblo Indians have legends of shepherds finding a cross and having it disappear back to place of origin indicating this is a sacred spot.

In the early nineteenth century, Spanish-Mexican settlers transformed this tradition into their devotion to the Lord of Esquipulas, a Guatemalan Christ figure whose leafy cross suggests the Mayan Tree of Live and whose veneration also involves pilgrimage and the use of sacred earth for healing.

“Though creeds and cultures may differ, the human spirit is transcendent and always finds its way to holy places.” (from Pilgrimage to Chimayo by Sam Howarth and Enrique R. Lamadrid)

Abiquiu village, the home of the renowned painter Georgia O’Keefe (see her painting at top of page), was inhabited for centuries by Native Americans before and after the Spanish settled here in 1692. You will see her house in the village and visit nearby Ghost Ranch where she had a studio, and the dramatic landscape that inspired her artistry has continued to attract a steadily growing community of traditional and contemporary artists.

“Someone else’s vision will never be as good as your own vision of yourself.  Live and die with it ’cause in the end it’s all you have.  Lose it and you lose yourself and everything else.  I should have listened to myself.”
Georgia O’Keefe

Walk in Frijoles Canyon and see pueblo village ruins (which were abandoned by 1550), rock paintings and petroglyphs. Some of the dwellings were rock structures built on the canyon floor; others were cliff dwellings carved into the volcanic tuff of the canyon wall.

The more adventurous can also hike to Alcove House, which is located in a high cliff side cave containing a small, restored kiva that the hiker may enter via a series of ladders.

A large collection of structures at the monument were built during the Great Depression by the Civilian Conservation Corps, constituting the largest assembly of CCC-built structures in a National Park area that has not been altered by new structures in the district. This group of 31 buildings illustrates the guiding principles of National Park Service Rustic architecture.

Los Alamos. This remote mesa-top city was once the secret site for the Manhattan Project, the development of the first atomic bomb. The Bradbury Science Museum displays exhibits about the history of Los Alamos National Laboratory and its modern day research in physics, human genome and more. Many of the exhibits are interactive and feature videos, computers, and science demonstrations.

At the museum, I pondered what was unleashed from this World War 2 facility.  It seems such an anomaly, placed here amidst Prehistoric Puebloan sites and the remote beauty of the rugged mountain land.

Coronado National Monument on the Rio Grande River with it ruins of an ancient Kuaua Pueblo village and restored underground kiva with murals on the wall.  The self-guided walking trail near the river is a lovely experience.

Create your own Southwest Cultural Exploration: