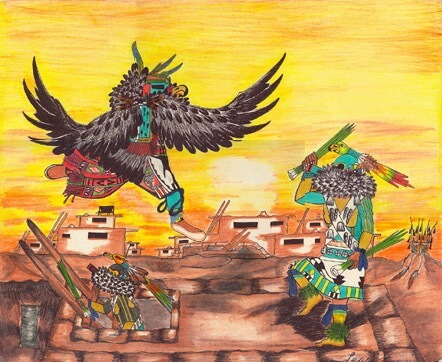 Kachinas are the spirit essence of everything in the real world.

Kachinas are supernaturals, embodying the spirits of living things and also the spirits of ancestors who have died and become a part of nature. Kachinas are believed to possess powers over nature, especially the weather, but higher gods limit the extent of their powers.

The Kachina role is to represent game, domestic plants and animals, birds, insects, even death itself. The creative force of the sun and the abstract power inherent in neighboring tribes are visualized as kachinas.

When Kachinas appear during ceremonies, they assume visual form and appear in the streets and plazas of the villages. As a supernatural they may cure disease, grow corn, bring clouds and rain, watch over ceremonies and reinforce discipline and order in the Hopi world.

The Hopi do not worship these kachinas but rather treat them as friends or partners who are interested in Hopi welfare. They give substance to the immaterial, and thus become intermediaries between the physical and the spirit world.

The Kachina season in the villages begins around the time of Winter Solstice as they prepare the ground for the planting season and closes in late July with the bringing in of the first harvest.

There have been over 800 different kachina beings documented. In any one season, 200 different ones may appear.

“The origin of Hopi kachinas lies far back in the prehistoric past. The Kokopilau Kachina sings a song in a language so ancient that not a word of it is understood by the modern Hopis, who know only that kachinas accompanied them throughout their migrations. Indeed, they assert that kachinas came up with them during their Emergence from the womb of Mother Earth.”
(Frank Waters from Book of the Hopi)


Hopis are a reverent people; their life revolves around the ceremonial cycle of the year. 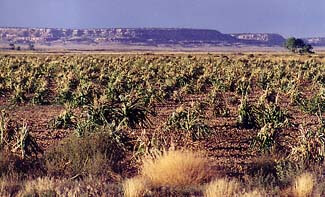 They are farmers who miraculously grow corn, beans and squash in the sand in a land that averages only 10″ of moisture.

Hopi is known as a place of power where humans could call forth the assistance of nature to support their existence in this arid land. The power of their faith is immense.

They developed a complex religion to secure supernatural assistance in fulfilling their needs for water to farm in the high arid desert. Kachinas are one element of Hopi religious life.

Hopi artists, usually men, carve Kachina likenesses from cottonwood root (which is associated with water). In Hopi life they are given to girls at the Bean Dance and the Home Dance to teach them Hopi ways. And today they have become an art form popular with collectors.

The modern style carvings have more realistic details and are placed on stands for display. They look more like the kachinas that appear in the villages such as the Butterfly Kachina above and Star Kachina

Children are given small figures carved of soft cottonwood roots, correctly painted and costumed to represent them. These “dolls” have become an art form of their own. These dolls are also called kachinas but are not invested with power though they are treated with great respect; their primary purpose is to help familiarize children with the real kachinas. (Frank Waters from Book of the Hopi)