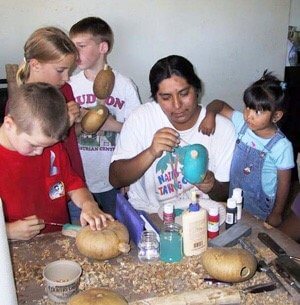 Exploring How Respectful Interaction Between Cultures Can Engender Fresh Perspectives

“Even though our modern world invades their world and they incorporate it and deal with it, they are still driven by their own values that often have nothing to do with our world. Part of me gets fed by this resonance.”

Article and images are by Sandra Cosentino

Native infusion began as a child for me–I remember on trips to northern Arizona seeing Navajo families using horse and wagons coming to trading posts; then in later years, driving pick-ups with the kids in back.

Since childhood I have been fascinated with the Colorado Plateau canyon-scapes and vast open spaces.   During the 1980’s and 1990’s, I began intensively exploring canyons, prehistoric puebloan ruins and rock art.  I felt a sense of presence of the ancestors still alive there somehow. Then as I began meeting Hopi, Navajo, and other Native people who were still living a heritage based on centuries or millenia of experience in these lands, my horizons broadened in ways hard to explain. 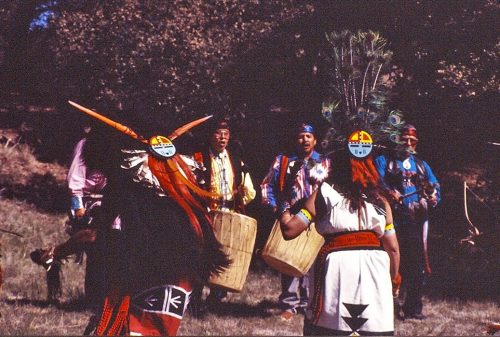 Hopi and Zuni group at a gathering I held in northern Arizona in 1995.

Quietly observing and getting to know people as we visited, explored, went to ceremonies and fairs, sat around the campfire with stories, songs and prayers; I came into deepened appreciation of the cultural values and the heart-centered, here-now enduring strength of the Native people (also Havasupai, Yavapai, Apache, Tohono O’dam, Cherokee, Zuni, New Mexico puebloan peoples, Alaska Native people, Quero villagers I met in Peru) I came to know over these decades.

I became infused with fresh energies, new perspectives and a deepened sense of being part of this land. The land, which I have always loved, became more alive to me. 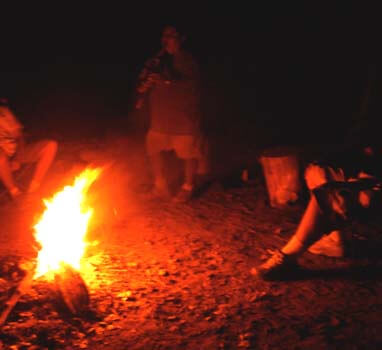 Oh, the fond memories of sharing around the campfire!  Navajo host/leader is playing flute.

I will never forget a Hopi leader who spoke in 1991 at the dedication of an ancestor ruin site south of Sedona that had been saved from destruction by purchase by the Archaeology Conservancy. “This is your heritage too,” he stated with deep sincerity including us in the circle of his world. I took that in on a deep level.

Circles of Sharing.  In 1991, I began to create circles of sharing between Native peoples of this region and people from all over the world.  We would enter the Native world in friendship, respect and knowledge of their culture.  In this exchange, visitors felt welcomed and free to open their heart.

Expectations. I have observed that visitors new to Native lands often come with unrealistic expectations that tribes live in a pure world untouched by TV and the litter of modern packaging. That there are tribal medicine people that can magically heal and transform them. Perhaps this portrays a a longing for pureness and spirit connection missing in our own world.

Time out of Time.  Once you get past stereotypes and just relax with what is, visitors to Native worlds often sense a devotional energy that is deeply inspiring. Here, people live with spiritual context woven into daily life. They walk in our modern world and their ancient one trying to balance dualities. When in Native world you slip into a sense of timelessness as if you have left the modern world behind. 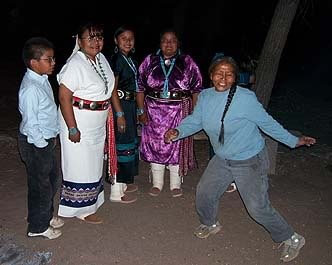 Individuation-Community.  We come from a culture of extreme individuation and have the freedom to choose our life direction and focus. Yet many feel disconnected from community and earth. Native people give us a tangible experience of connectedness that touches a deep chord within us. They speak more from a feeling place with more openness than we are used to our fast-paced, frequently superficial style of talking to each other in today’s urban worlds.

Contrast gives us the opportunity to look at what works for us and what does not. In this dual experience, something gets fed. We can more clearly appreciate our own environment and give energy to that which nurtures us.

These friendly circles of sharing open us to learn from and appreciate each other. Beyond any rational understanding, I just love to go and hang out. It is always a time out of time experience where the urgencies of modern life just fade out and something deep inside gets nourished.

Observations from people who have entered Native American worlds with me. 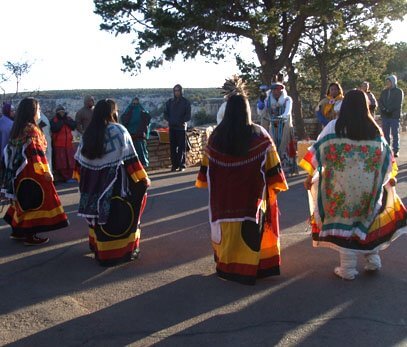 Dawn ceremony with Havasupai people who live in the canyon.
For me these are timeless, deeply inspiring gatherings that connect us to circles ancient and modern.

Fresh Wind Comes In: “Open spaces and surreal shapes of the landscapes create a feeling of expansion and lift. When you go there, you engage with people who live and breathe that on a daily basis. The land is a metaphor for what happens inside of you. A fresh winds comes in.

It allows me to cool my jets in a way that I can get in touch with my core awareness.

Even though our modern world invades their world and they incorporate it and deal with it, they are still driven by their own values that often have nothing to do with our world. Part of me gets fed by this resonance.

Native peoples have intimate relationship with the cycles of the year. This activates that part of me and allows me to look differently.

Being in close proximity to other mindsets and feeling patterns can give me a vacation from myself and my habits–to return to freedom of individuation in our world and put some of their ways to use in my world–inner and outer. There is an opportunity to reinterpret my relationship to my own life.” TaVie Jazlyn, Sedona

Expanded Reality of Time:  “Native peoples of the Plateau region live in a very different way than I do. Looking at how they integrate the modern into their world is confusing at times–seems to be a world of opposites. It is the closest we in the greater westernized parts of the US can get to being in the third world.

It jars my psyche, shifts me into a very different way. I see my world in a different context of possibilities. The effects last for a day or even several days. I feel like I have been in an altered place. Then when home, I can feel the difference and it heightens my senses, shifts perceptions. There is an expanded reality of time.”  Deborah, Cottonwood, AZ.

The journey, the native people we met, the privilege of witnessing their sacred ceremonies and land, has stayed with me in a deeply felt and profound way.  Ann Adachi

Priorities. “In some way I feel liberated from the idea of putting people into categories, seeing people in a particular light. The Hopis especially have broadened our horizons in these respects.  What wonderfully warm, friendly folks they are! They have so little materially but their hearts are bigger than most!  Their way of life, while so different from ours, professes love of family and community and their link to the earth and what she gives to us each day is so refreshing, so real.  We take so much for granted on this planet and when witnessing the way in which the natives revere the tiniest grains of corn, their sustenance, we are brought back to a realization that in many ways we get our priorities wrong.  They are truly beautiful souls.”  Virginia Foley

Prayer Touches World. I treasure this insight from one of our Hopi Winter Solstice group who realized, “what it means to celebrate the solstice to understand the cycles of mother earth more deeply, subtly, intuitively.” And how “My prayers and my intentions grew from the relative singular to the collective – all of humanity in a fuller way then ever before. Some Hopis never leave their land but their prayer touches the entire world.”

Healing….
In my opinion healing in the Native American sense would be more on the lines of coming back into balance (as we were discussing) – as we are already perfect.   In my view some non-native people “looking for healing” are looking outside themselves when they just need to look within.
Native American Medicine people in general assist the person in need of healing to heal themselves  – generally by removing something that was in the way of balance (because everything that  a person needs is already within) whereas in Western trained physician medicine generally the focus is on fixing the person by providing something that was supposedly “wrong” or “missing” and obviously we can’t do this ourselves we need a highly trained physician to do this for us!
This is changing but is still the current mainline Western cultural belief therefore that is why in my opinion people come looking for “healing” in the way that they do – (and one reason why Indian people appear to be “mystical” to those who are not used to paying attention to themselves.)  Roberta Duhaime